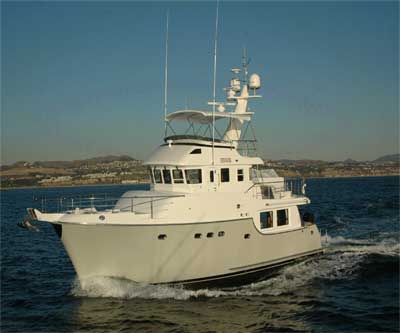 Built for the discerning boater, Pacific Asian Enterprises prides it’s product on having “an international reputation for high performance, exceptional Long range cruise-ability, and an extraordinary level of detail and finish.” PAE Yachts in Dana Point , California delivered Segue a brand new 55′ model, to an experienced yachtsman who will use her throughout the West coast of the US, Canada and Mexico.

When we planned the electronics package for the Segue, the new owner made it perfectly clear that large displays were his top priority. His vision is admittedly poor and small black and white screens, and CRT screens prone to glare, wouldn’t do. Therefore we chose equipment with bright color and large graphical displays.

PAE Yachts builds a very ergonomic dash. The layout is relatively linear. We take the equipment that the operator will manipulate the most often and place it at his fingertips. As you can see all the big screens are located so that the operator has easy control. This vessel has a V.E.I. computer which runs the Nobeltec program. This is playing on a Furuno MU155C color monitor. As you can see the pictures are very bright and sharp. To the right of the computer monitor is another 15″ Monitor, which there is a 1954Cbb/nt Radar running. This 12KW radar acts as the main radar. On the 3rd screen there is a 1934CBB/nt Nav-net radar that acts as the back up radar. Also available on the monitors are the Closed Circuit TV camera’s, one on the aft deck and one in the engine room. 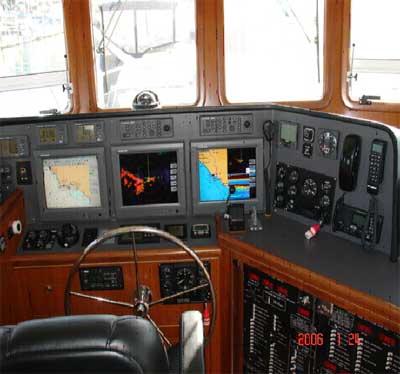 Also there is capability to bring TV and DVD from the Bose system in the salon to the pilot house. The Segue has 2 autopilots, Robertson AP50. Its large information screen includes a rudder angle indicator, GPS data and waypoint steering displays. It is interfaced with the both the Nav-net system and the Computer. This is selected by simply flipping a switch. The autopilot is getting its heading from the New Furuno SC 50 Satellite compass. This allows the pilot to get extremely accurate heading data, thus making the pilot steer a straighter course.

As far as depth, we have installed two depth systems, a Furuno fishfinder which is part of the Nav-Net system. It includes a dual frequency 1kW bronze, through-hull transducer. It’s beam angles are 28 and 10 degrees, at 50 and 200kHz. This transducer gives the BBFF1 exceptional target definition in deep and shallow water. The second depth system is part of the Brookes and Gatehouse H1000 system. We get speed thru the water, digital depth and wind information thru this system. It also acts as a back up in case of failure of the Nav-net system.

For communications, the “Segue” is equipped with two Icom M602’s VHF radios. These radios are commercial quality in a compact package. Our client will cruise offshore, sometimes for days at a time, so we also installed two satellite phones. The Fleet 55 by KVH, which will allow voice communications around the world and High speed data, on about 80% of the planet. The back up system is the Motorola 9505A Iridium phone. This incorporated with the applied sciences docking station makes for a nice backup system. Many owners will use the Iridium for normal voice communications to keep costs under control. The iridium has an antenna about the size of a can of beans, and a coverage area of around the world. Both phone systems are tied into a C-phone intercom system, which allows the customer to make and receive calls from different locations on the vessel. 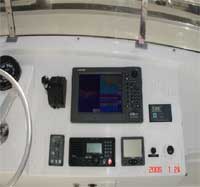 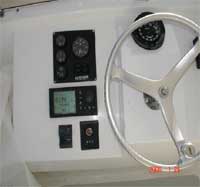 On the flybridge there is a complete complement The “Segue” is currently cruising the waters off Cabo San Lucas, Mexico and, at last report, was having a great time. of electronics gear. Including a GP1920CNT Nav-Net display, a AP 25 control, B &G H1000 display and a Icom VHF radio.