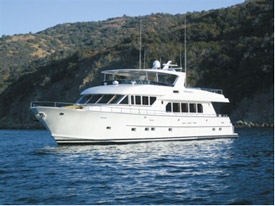 The Paragon 94 is the latest in the Paragon series and Tenacity is the 4th yacht we have outfitted for this new and upcoming builder – two time winner of the Best in Show Award at the San Diego Yacht Fest.

Paragon wanted Alcom Marine to design a simple but complete package that could be offered as a “standard” electronics package, which could be used right out of the gates and be easily expanded to tailor to any owner’s future requirements. Also Paragon wanted to be able to have her ready to set sail on a maiden cruise one week after delivery to the USA with all shipboard functions fully operational.

We started once again with the Furuno MU170 17” monitors for the pilothouse displays, these monitors have a proven track record and are extremely user friendly, reliable and make any input look great.

Next we selected two Furuno Navnet MFD 3D black box processors that give us endless options to expand using either NMEA 2000 or the Furuno Navnet networks. These processors give us 3D charting along with position that is fed from either the stand alone Furuno GP32 or the new Furuno GP330B black box NMEA 2000 sensor. 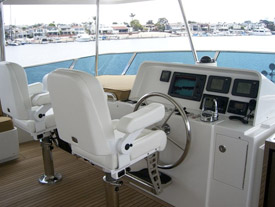 Radar data comes from the two independent Furuno DRS12 12kw 6’ open array antennas that can each display dual ranges and are selectable thru out the Navnet system for redundancy.

The sounder is a Furuno DFF1 digital sounder with 1 kw transducer that can also be displayed on the entire Navnet network.

A Simrad AP50 autopilot is linked to the Navnet system which will receive navigation data and take you to your desired waypoint with a few pushes of a button. Multiple control stations make it easy to engage and disengage the autopilot from the pilothouse, flybridge or aft deck steering station.

An onboard Nauticomp ships computer system can also send navigation data to the autopilot using any of the current navigation soft wares available.

The Nauticomp computer also is your source for XM satellite weather via a WxWorx weather receiver that gives live time marine and land data. 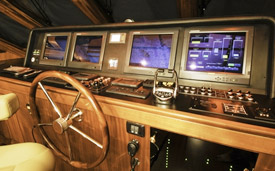 In addition the Skymate 200 system can give you downloadable weather reports for your area, send quick emails home and monitor several vital ship functions such as high water, AC and DC power health while on board or away from the vessel with email reporting via satellite.

The yacht is also protected by four Elbex ball cameras that are fed into an AVT camera matrix that can be viewed from any of the TV locations.

Communications are done thru the dual Icom M604 VHF radios, located on the flybridge and in pilothouse connected to the Comrod 23’ VHF antennas. In addition there is a separate Icom M504 VHF located in the Captains stateroom with a remote station located on the aft deck for monitoring traffic. Intercoms and incoming/ out going voice calls are handled by a Panasonic KXT848 PABX which has 2 cordless phones in addition to the usual wired locations to make communications on the yacht easy and simple. With the addition of an optional sat com the PABX can give the owner worldwide communication from any where aboard the yacht. 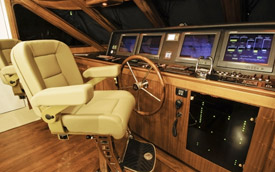 On the flybridge we have used a Furuno MFD12 12” Navnet 3D system that can access any info fed into the pilothouse or be used as a totally stand alone plotter/ radar/sounder. Wind speed and direction along with water depth, speed thru the water and sea temp are displayed on the new Furuno FI50 NMEA 2000 compatible multi instruments that feed data to and from the Navnet system with displays located in flybridge, pilothouse, master and captains staterooms, while using independent transducers for redundancy,finally mobile sat TV is provided by a Seatel Coastal 24 system that can supply coverage from multiple service providers in almost any part of the world.

Installations of all the electronics where performed at the factory in Kaohsiung Taiwan under Alcom Marine’s supervision and support using our highly detailed blueprints and schematics. Upon it’s arrival here in S. California the yacht was ready to start cruising after an unbelievably short 4 days of commissioning and sea trials by Alcom Marine and Paragon crew.