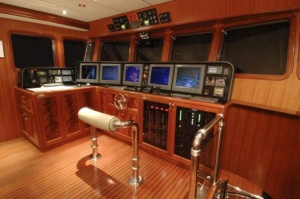 PAE’s new Nordhavn 86 is impressive with a 24-foot beam and a full load displacement of over 325,000 pounds. The N86 has all the trademark qualities and functions that Nordhavn is know for and more, as they enter into the megayacht market. With over 7,000 gallons of fuel the N86 can cruise for about 4,000 miles at 10 knots before refueling.

As we prepared the electronics package for Cari Ali the owner’s main priority was reliability for long range cruising. He selected Furuno as his main vendor for the electronics because of its reputation, performance, and reliability.

In the pilothouse there are five Furuno MU 170C monitors, which the owner chose because of their extremely bright and sharp images, as we as their durability. They are set up to display images from the Furuno 2127BB, which is Furuno’s commercial quality radar and functions on Cari Ali as the main radar system. The boat also has a Furuno 1954CBB/NT Nav Net system, which offers a fish finder, chart plotter and also acts as the back up radar. Cari Ali is 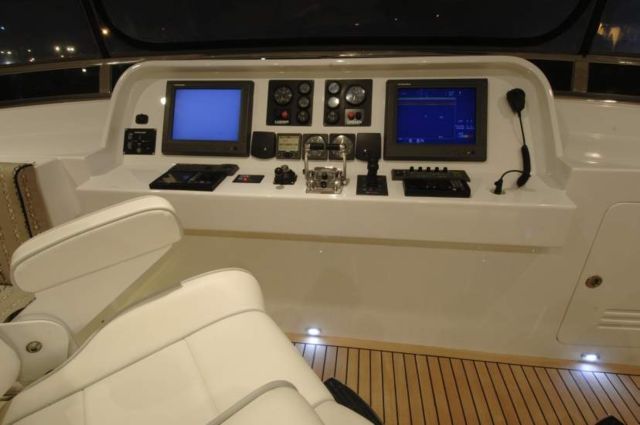 also outfitted with a Furuno FA-150 AIS system which will display the ship’s data, as well as other ships’ data that are equipped with the AIS system and within VHF range. The boat operates its main chart plotting on a VEI computer which runs Nobeltech’s Admiral Software. Cari Ali also features a Furuno CH250? Searchlight sonar which performs both vertical and horizontal searches making the fish finding more productive, and helps navigate in poorly charted areas.

As for communications, the owner chose to have both a KVH Vsat for high-speed internet and a KVH Fleet 77 TracPhone. The boat also has two Icom 604 VHF radios.