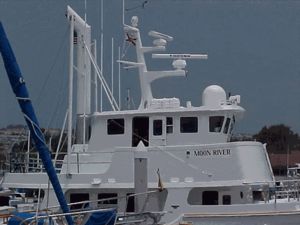 In the summer of 1999 the Nordhavn 62’ Moon River was christened in Dana Point, Ca. Moon River is a flat out, no-holds-barred, long range fishing machine. Its adventurous owner demanded only that we push the technological envelope and use quality equipment. We are proud to say we met both requirements and the MoonRiver is forging towards exotic destinations around the globe. 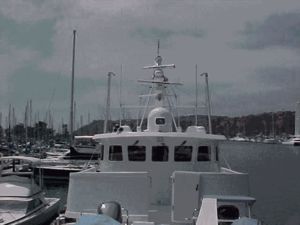 When designing a package for a boat, no matter the size, the first thing we consider is how the owner will eventually use it. Where will it go? For how long? Because the Moon River will be at sea for extended lengths of time, redundancy became a priority. We installed two Furuno radars, the primary being Furuno’soutstanding new “Black-Box” FR2100 series. Coupled with a Laser Plot.

EPHIS system, the radar, as well as most of the other systems on the boat are controlled with a large touch screen display.The display also controls an Elbex closed-circuit television system, which monitors the engine room and outside decks. A Raytheon Infrared Nightvision Camera displays a nearly perfect image in the dead of night. Two Trimble NT 300 GPS’s with Sub-Meter accuracy anchor the navigation system. We also installed an incredibly intuitive instrument package from Brookes and Gatehouse. The large, bright, full function Hydra displays will show the operator weather conditions, boat performance, navigation information and other important data.Arguably the most important system on a long trip is the autopilot. Moon River has two completely redundant Robertson units. 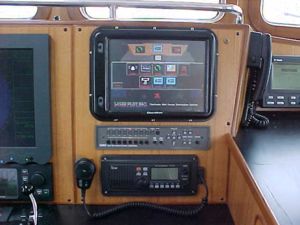