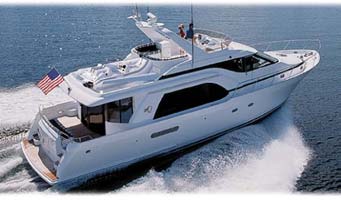 When you enter the salon aboard Dare you can literally see your reflection in the high-gloss cherry wood throughout the interior. The décor is sparse and uncluttered, but perfectly elegant in its simplicity. Like a model home, every component of the boat is fitted, makes sense in function and is of the highest quality. 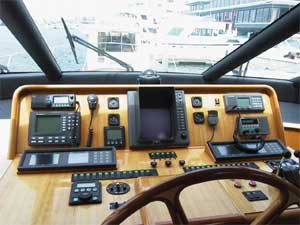 When the boat was sold last summer, the new owner wanted to update the electronics. He planned to take the boat from California through the Panama Canal, and throughout the Caribbean. The electronics onboard were good quality pieces from Furuno, Icom, Raytheon and Simrad, so the plan was to integrate them with a new Furuno Sonar and a bright Northstar 961DGPS/Plotter. In doing so, we also wanted to freshen up the layout of the pilothouse dash. 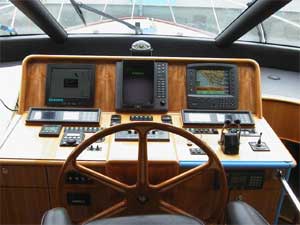 Originally, all of the equipment was placed on the vertical surface facing the helmsman. The gear was assembled around a large 10 kW Furuno 7111 Radar, which was centered directly above the wheel. After the radar, though, the VHF radio, SSB, GPS and various other items were jumbled and placed incongruously about the dash.

Microphone chords hung down over other equipment, and small engine gauges used up valuable real estate.

At our request, Queenship promptly shipped new cherry wood panels for the dash. They were perfectly grained to match the existing dash, and with several coats of Sterling we had a blank canvas to place the new gear.

Our first decision was to use a CH-250 sonar, a brand new Black Box unit from Furuno. The new machine is very simple to use yet very sophisticated. Sonar has been notoriously complicated to interpret for all but those who use it daily. The average cruiser and recreational fisherman could barely adjust the machines properly; much less understand where the beam was pointed and what was being displayed. The CH-250 has a graphical display and menu driven prompts which make the unit much easier than any unit that has come before it. The controller is clearly labeled, with large knobs for the Range and Gain functions, and waterproof buttons for various menu items.

The best part about this sonar though, is that it works with virtually any monitor. We chose OceanPC’s 15″ LCD Daylight viewable screen. It’s crystal clear display along with an uncluttered black frame complimented the other displays for the radar and GPS/plotter.

The Northstar 961XDC is quite simply the finest GPS plotter on the market. It has a 10.4″ LCD screen that is visible in any light. The Differential GPS accurately tracks 12 satellites. The unit uses Raster charts, scanned onto a CD, for point and shoot navigation over a real chart display. The bright colors and large graphics make this unit a very powerful navigation tool.

In laying out the dash, the only item we kept intact was the radar. In practice we like to put the Radar in the middle of the dash, with the much used GPS on the right (if the operator is right- handed), and the depth device on the left. Everything else could be relocated off the vertical surface, giving the dash a clean look, with only three large screens.

The communication gear was moved down to waist level next to the wheel. An operator seldom needs to look at the digital display of a VHF or Single Side Band radio for more than a quick glance, and the microphones can obviously be brought up to a useable level. The gauges were moved next to the existing engine instrumentation.

We moved the existing Trimble GPS/Plotter to the flybridge and integrated it through a switch to allow for complete redundancy should the main GPS fail. Also, when running the boat from the flybridge, the skipper can enter waypoints and transfer the data to the autopilot just like below.

A complete second station for the sonar is also on the bridge using an identical control unit and Furuno’s own 10″ flat screen monitor.

Dare is currently cruising the Caribbean after an extended stay in Central America. The skipper reported he safely navigated through the shallow channels of Salvador, relying only on the Furuno sonar.