Chum’s Infinite Freedom is hull number one in Ocean Alexander’s new line of long range cruisers. At 64 feet in length and a 20-foot beam, her cruising ability is only outmatched by her comfort and luxury. This boat was completed in January of 1999 and delivered to Seattle, Washington for her debut at the Seattle Super Yachts Show. In November, after its Pacific Northwest showings at Seattle’s Ocean Alexander Marine Yacht Sales, the manufacturer decided to send the boat south for it’s introduction to the Southern California market.

Most new boats arrive from the factory with no electronics to speak of. A compass is often the only standard navigational accessory. While custom and semi-custom yachts are in production we often work closely with the new owners and their agents to design a practical navigation and communication system which fits the intended use of the boat. We then work with the yacht builder to layout and fit the equipment into an ergonomic and stylish bridge.

Because “Chums’” was originally a spec boat from the Ocean Alexander factory, there was no predetermined sizes or design for electronics. Furthermore, because the boat was shipped from Taiwan there was no need to fit her out, and a buyer could eventually customize her as he or she wished. The yacht has ample dash space in the pilothouse and a well thought out flybridge, with virtually limitless potential for adding gear.

For the 1300-mile trip south, and for the safety of the crew, the yacht was temporarily fit with a Furuno 1932mk2 Radar and an ICOM M-127 VHF radio. The delivery skipper used dead reckoning to navigate, and the boat was delivered safely to Orange Coast Yachts in Newport Beach.

The yacht sold in March of 2000 and, after equipping her, the new owner plans to cruise throughout Mexico and Southern California initially.

After removing the temporary radar and VHF, we had an absolutely bare boat to work with. The owner relied on Orange Coast Yachts to outfit the newly named “Chum’s Infinite Freedom”, and together we put together an electronics package which would be high quality and powerful, yet simple to use. Also, there is redundancy. Both the bridge and pilothouse have the same or very similar equipment. The gear is placed in similar locations, with a central focus on the radar screens, and the communication equipment is grouped together conveniently.

Here at Alcom Marine, we believe there is no single manufacturer that builds the best of all electronics. The National Marine Electronics Association (NMEA) has a standard format to which all marine electronics manufacturers build their equipment in order to interface consistently. Therefore, we pick the best and most appropriate piece of gear from some or all manufacturers depending on its function. 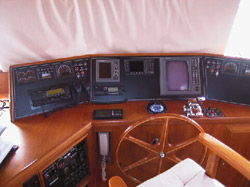 For the main radar, we’ve installed a Furuno FR 7112. This unit is a 12 kW model with a 12-inch screen. It’s large screen and high power will allow the boat’s operator to steer in confidence in any type of weather conditions. In some cases we use a repeater as a secondary station for the flybridge. Repeaters, such as Furuno’s FMD series, are fully functional units that share a single antenna with the main radar. Because this boat arrived with a complete radar, temporarily installed, we opted to use it as the secondary radar. The 1932mk2’s 10″ screen and 4 kW power output will compliment the main radar and, being a Furuno model, will operate very similar to the FR 7112. It’s a waste of time learning the various intricacies of various gear, so when doing redundant systems, we like to match the equipment in one station with that of the other.

The depth sounders we used are also Furuno products. The FCV582L is a color LCD fish finder with 600 watts of power and dual frequency. (50/200 kHZ) It’s compact, but still has great power and clarity, and fit nicely in our limited space. For the past couple of years, Northstar’s 951XD has been considered the top of the line in GPS Plotters. By popular demand Northstar added a bright color display and dubbed the new product the 952XD. We’ve installed one of these in each station, and interfaced them through the autopilot. These plotters will allow true “point and shoot” navigation, and waypoint information will be transferred to the Robertson AP20 autopilot, radar and sounders.

Long-range yachts may have to travel hundreds, or even thousands of miles in difficult sea conditions. An autopilot may be subject to a long, rigorous workout and quality should take precedence when choosing a pilot. Robertson has long been known for high quality and durability. Also the AP20, which was used on “Chum’s”, is very programmable and responds to sensitive calibration. It can be very difficult to tune a pilot for following seas, and then have it steer well in any other conditions. A very “programmable” pilot is necessary, and the AP20 fit the bill. It also has a large data window, which displays a rudder angle indicator, GPS information and compass direction. A control head is located at each station.

There are several factors to consider when deciding on the proper communication package. Some items are mandatory, a VHF radio for instance. Every boat should have one, period. “Chum’s” has two, a commercial grade Icom M127 with a 9 dB, 23-foot Shakespeare antenna, and a more compact Icom M59 on the bridge. We balanced out a cell phone antenna on the arch with a 6dB 8-foot Shakespeare antenna for the smaller radio.

Both a satellite telephone system and a Single Side Band (SSB) radio will cover long range communications. There is some debate as to how necessary an SSB is. Cellular telephones, and now satellite phones, have surpassed single side band technology, and most people already own them. SSB still fills a need, though, in several circumstances. In an offshore emergency you will contact the Coast Guard. They will most likely divert some sort of commercial vessel in the area to your position. In most cases, if that vessel is a hundred miles away you will have no contact with it until it gets within VHF range. Most commercial boats carry an SSB, as well as the Coast Guard, and single side band will be the fastest and safest way to contact them.

“Chum’s” has an Icom M710RT Single Side Band on board. It is a 150-watt radio, with a remote display head and a large digital display. We installed a 23-foot Shakespeare antenna and an extremely efficient copper grounding system. A proper grounding system will assure the best performance from a long-range radio.Most long distance boaters tune into the ‘nets. These are predefined times and frequencies, where several cruisers congregate and talk about weather, their travels, and anything else of interest. Nets are the original chat rooms, and can be a great source of timely information.

Telephone service will be provided with both long-range satellite and standard cellular systems. We installed a KVH Tracphone, which will cover continental North America at a reasonable $1.19 per minute. When the boat is near home port, guests will use standard Motorola cellular phone service. Each system is tied in with a Charles Industries C-Phone system, so every room is connected by an intercom as well as the outside lines. The C-Phone also serves as the boats loud hailer and is connected to a 40-watt hailer horn. 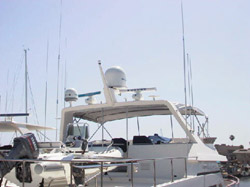 Of course boating doesn’t have to be all work. The entertainment system on “Chum’s” will provide satellite television underway throughout North America. It’s a technological challenge to stabilize a satellite dish at sea. The dish must be constantly pointed at a precise location in the sky, all the while being rolled around by unpredictable motion. Sea-Tel produces a sophisticated gyro stabilized dish, which provides DirecTV as well as many other service providers. The system is run through the four TV’s on board, which are, in turn, run through a Sony audio system. The boat has digital quality video and sound on Sony televisions, at all times, in all but the worst conditions.

At Alcom Marine, we believe electronics are safety products. They are there to give the boat owner a level of confidence, which makes boating more enjoyable. We also provide Emergency Inflatable Liferafts, as well as Emergency Position Indicating Radio Beacons (EPIRBS). Both of which we hope you’ll never need to use, but strongly believe should be on all ocean going vessels. “Chum’s” has a Switlik MD2 dual tube, 6-man liferaft. It is packed in a hard plastic canister and mounted to an aluminum cradle using a hydrostatic release. It will deploy unattended and automatically should an emergency occur.

A Northern Airborne Technologies EPIRB is also mounted on board, near the liferaft. This next generation EPIRB is interfaced to the GPS system, and, in an emergency, will transmit the Latitude and Longitude of the vessel to a satellite, and on to the proper authorities. EPIRBs transmit, on a regular basis when deployed, your position, vessel particulars and personal information. The Coast Guard will be alerted to the exact location of a vessel in trouble, and will take action immediately.

Weather will be monitored using Furuno’s Fax 207 weather fax. It is a completely automatic unit with a built in receiver and 8″ paper. Clear satellite pictures are printed at a scheduled time, all with the touch of a single button.

We planned a sophisticated, yet comprehensible package for the owner of “Chum’s Infinite Freedom”, and hope, in her travels she will cruise safely and efficiently. As her name implies, the boat will carry her guests to the wide-open, but sometimes unforgiving, seas. They should, at least, cruise in comfort knowing the highest quality systems were professionally installed throughout the boat.